WSJ.com's Andy Jordan rides along with a New York City cabbie to see what passengers think of the new GPS-equipped taxis. 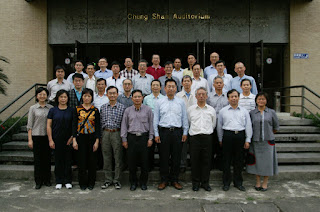 All cats are grey in the dark

A LIFE OF PICASSO By John Richardson 首三部曲

You do not install quality; you begin to work at it.

The End of Medicines?

今天工商時候報有人拿
The End of Medicine: How Silicon Valley (And Naked Mice) Will Reboot Your Doctor (HarperCollin 207)
Andy Kessler (著)

Divide responsibility and nobody is responsible.

Management of outcomes may not be any more than a skill. It does not require knowledge.

Our customers should take joy in our products and services.

Manage the cause, not the result.

bring back the individual

Innovation comes from people who take joy in their work.

We should be guided by theory, not by numbers.

When a system is stable, telling the worker about mistakes is only tampering.

Our customers should take joy in our products and services.

Why aren't there enough napkins in the world? Is it a matter of distribution? 這句的語境沒弄清楚

The whirligig of the taste

In Search for Manager, a New Leader Emerges

Playing At Dice - What That "Weekend Exercise" Was All About

傳道書 Ecclesiastes or The Preacher

Norman Mailer, Towering Writer With a Matching Ego, Dies at 84

A School Is More Than an A, B or C

They are one channel of vitality


Equally, if his heart had given entertainment to that prohibited
guest, his silent fighting of his way through the mental condition
of this period might have been a little meritorious. In the
constant effort not to be betrayed into a new phase of the
besetting sin of his experience, the pursuit of selfish objects by
low and small means, and to hold instead to some high principle of
honour and generosity, there might have been a little merit. In
the resolution not even to avoid Mr Meagles's house, lest, in the
selfish sparing of himself, he should bring any slight distress
upon the daughter through making her the cause of an estrangement
which he believed the father would regret, there might have been a
little merit. In the modest truthfulness of always keeping in view
the greater equality of Mr Gowan's years and the greater
attractions of his person and manner, there might have been a
little merit. In doing all this and much more, in a perfectly
unaffected way and with a manful and composed constancy, while the
pain within him (peculiar as his life and history) was very sharp,
there might have been some quiet strength of character. But, after
the resolution he had made, of course he could have no such merits
as these; and such a state of mind was nobody's--nobody's.

a beadle in full fig

You do not install quality; you begin to work at it.

The End of Medicines?

今天工商時候報有人拿
The End of Medicine: How Silicon Valley (And Naked Mice) Will Reboot Your Doctor (HarperCollin 207)
Andy Kessler (著)

Targets can seriously damage your health

The Dings and Dents of Toyota

Chicago looked glorious, but glory always has its cost.

Quote from W. Edwards Deming:
We must satisfy our customers.


customer
noun [C]
a person who buys goods or a service:

a satisfied customer
Mrs. Wilson is one of our regular customers.

在日常用語又可指"必須應對的人" Informal. An individual with whom one must deal: a tough customer.


The customer is always right. SAYING
said to emphasize that in business, it is very important not to disagree with a customer or make them angry

cool customer INFORMAL
someone who stays calm and does not show their emotions, even in a difficult situation

If you stay in this world, you will never learn another one.

Americans are increasingly frustrated about the subpar performance of this country’s fragmented health care system, and with good reason. A new survey of patients in seven industrialized nations underscores just how badly sick Americans fare compared with patients in other nations. One-third of the American respondents felt their system is so dysfunctional that it needs to be rebuilt completely — the highest rate in any country surveyed. The system was given poor scores both by low-income, uninsured patients and by many higher-income patients.

The survey, the latest in a series from the Commonwealth Fund, is being published today on the Web site of Health Affairs, a respected health policy journal. Researchers interviewed some 12,000 adults in , , , the , , the and the .

Given the large number of people uninsured or poorly insured in this country, it was no surprise that Americans were the most likely to go without care because of costs. Fully 37 percent of the American respondents said that they chose not to visit a doctor when sick, skipped a recommended test or treatment or failed to fill a prescription in the past year because of the cost — well above the rates in other countries.

Patients here were more likely to get appointments quickly for elective surgery than those in nearly all the other countries. But access to primary care doctors, the mainstay of medical practice, was often rocky. Only half of the American adults were able to see a doctor the same day that they became sick or the day after, a worse showing than in all the other countries except . Getting care on nights and weekends was problematic.

Often the care here was substandard. Americans reported the highest rate of lab test errors and the second-highest rate of medical or medication errors.

The findings underscore the need to ensure that all Americans have quick access to a primary care doctor and the need for universal health coverage — so that all patients can afford the care they need. That’s what all of the presidential candidates should be talking about.